Something that makes such a huge difference but doesn’t receive the credit it deserves is the radio system in vehicles. Sorry now-a-days it is known as your multimedia center. In only 20 years, manufacturers have come so far with their on board technology and we as consumers have come to demand and even require a fully functioning control area that keeps up with our latest communication devices (previously known as cell phones)

Chrysler has one of the best on board communications system that works with just about any phone, and works extremely well.” UConnect 8.4 is built atop QNX, a tight and secure version of UNIX developed by RIM (the Blackberry™ telephone maker). Chrysler and RIM are reportedly working together for full BB10 (BlackBerry OS 10) integration. BB10 is expected to have greater “machine to machine” capabilities than past versions, which should beneft future versions of UConnect” Allpar.com

It functions clean, has smooth touch screen technology and is easily updated with new software. You can even buy your vehicle without navigation and unlock it by entering a purchasable code from Chrysler.

The Drag and Drop menu bar lets owners drag their favorite icon to the main menu bar.
siriSiri Eyes Free (for iPhone 4S or later) lets drivers speak in natural language to send text messages, play music, set reminders, place phone calls, and access directions. It is activated by holding down the steering wheel button until the Siri screen appears and tones are played. Siri messages are processed remotely, not by the car, which should increase accuracy and allows the greater flexibility. It is likely that the data transfer occurs via the customer’s phone.
“Do Not Disturb” and “Reply with Text Message” features route incoming mobile calls to voice mail and suppress text messages; sending a customized response is optional. These are set up via the big screen.
Customers can now start songs from the beginning when switching between pre-set satellite radio channels.
A new online car manual is smart enough to know the car’s VIN and leave out irrelevant sections of the manual (e.g. not including diesel information for Hemi owners). The content is updated over the air.

These features are only available, for the moment, in the 2016 Chrysler 200 and 300, Dodge Challenger, Charger, Durango and Viper, Jeep® Cherokee and Grand Cherokee, and Ram 1500, Heavy Duty and Chassis Cab.

The 2016 Uconnect systems have also been retuned for better performance, with new software and voice recognition algorithms to improve voice recognition, routing, and songs and application selection. New noise cancellation software helps to increase the quality and clarity of handsfree phone calls. – Allpar.com 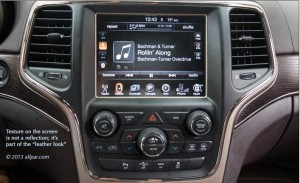